The science of nitrous oxide

Nitrous oxide (N2O) is a potent and long-lived greenhouse gas. In New Zealand, most nitrous oxide is produced by micro-organisms acting on nitrogen introduced to the soil via livestock urine or synthetic fertilisers.

Where nitrous oxide comes from

Nitrous oxide is emitted during some industrial processes, when fossil fuels burn, when solid wastes are treated, and when naturally occurring microbes act on nitrogen in agricultural soils.

Nitrogen is present in the soil naturally. It is a vital macronutrient that all plants need to grow and stay healthy. However, additional nitrogen is introduced to the soil via urine and (to a lesser extent) dung of livestock that have consumed nitrogen-rich pasture or crops, and when farmers apply nitrogen-based synthetic fertilisers or plant legume crops such as white clover to enrich their soil.

In New Zealand, the largest source of nitrogen in the soil is from livestock urine. Pasture plants typically need a lot more nitrogen for optimal growth than animals need for protein synthesis, so grazing ruminants utilise relatively little of the nitrogen they consume. Between 75 and 90 percent of it is voided in the animals’ urine, resulting in small areas of pasture soil containing high concentrations of urinary nitrogen.

A urine patch can contain the equivalent of up to 1000 kg of nitrogen per hectare. For comparison, fertiliser application rates are typically 30-50 kg of kilogram per hectare (although there may be several applications per year).

Emissions of nitrous oxide from nitrogen in the soil are largely the result of two soil microbial processes: nitrification and denitrification.

Nitrification is an aerobic process where microbes known as nitrifiers oxidise ammonium (NH4 +) to nitrate (NO3 −), creating a small amount of nitrous oxide as a by-product. Denitrification is an anaerobic process where another group of microbes—known as denitrifiers—in turn convert some of that nitrate into nitrogen of which some is released directly into the atmosphere as nitrous oxide.

Nitrification and denitrification rates are affected by a range of soil and climatic factors. However, field measurements have shown that, in livestock agriculture, high nitrous oxide emissions usually coincide with high soil nitrate levels and low soil aeration (wet or compacted soils). This strongly suggests that denitrification is the main source of nitrous oxide from intensive animal agriculture. 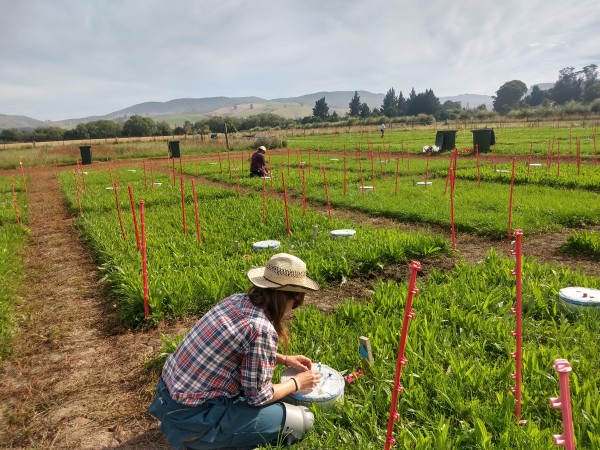 Nitrification, however, is often an essential prerequisite for denitrification to convert nitrogen inputs from urine or fertilisers into nitrate. Some of the nitrate produced during nitrification isn't taken up by plants and sits in the soil as nitrate. This nitrate can be denitrified to nitrous oxide, or leach or run off in irrigation or rainwater and end up in waterways. Nitrate in water can also denitrify to nitrous oxide, resulting in indirect nitrous oxide emissions from affected waterways.

Why nitrous oxide is a problem

Although only a small component of the earth’s atmosphere, tonne-for-tonne and averaged over 100 years nitrous oxide is nearly 300 times more effective at trapping heat than carbon dioxide*. In addition, every emission of nitrous oxide stays in the atmosphere for over a century, making it a long-lived greenhouse gas.

Nitrous oxide accounts for around 12% of New Zealand’s total greenhouse gas emissions and 21% of our agricultural emissions in 2018.

*Using Global Warming Potential (GWP), the standard used by the UNFCCC for comparing the warming effects of weight-for-weight emissions of different greenhouse gases, averaged over a 100-year period. Carbon dioxide has a baseline GWP of 1. Nitrous oxide has a GWP of 298.

A closed chamber enables samples of air to be collected for analysis from small patches of soil (such as directly above a urine patch). Within the chamber, gases given off by the soil rapidly accumulate. Researchers can measure the accumulation over time to determine the rate at which the gases are released. The air samples are analysed in a laboratory for nitrous oxide and any other gases of interest.

Micrometeorological techniques are used to estimate emissions from an entire paddock. Instruments measure wind speed, direction and turbulence, as well as the concentration of nitrous oxide in the air above and downwind from the paddock. These data are used to calculate the total amount of nitrous oxide emitted.

Nitrous oxide emissions are highly variable over both space and time, so the assessment of emissions from individual livestock farms based on actual measurements can be very costly and impractical. Models are therefore an important means of estimating nitrous emissions from livestock systems and evaluating practices that can reduce emissions.

The models in use range from relatively simple national inventory or annual accounting systems, to detailed process-based models using factors and constants that are derived from measurements under experimental and controlled conditions.

In New Zealand, the nutrient budgeting tool OVERSEER® is an example of a model that can be used for estimating on-farm emissions of nitrous oxide.

For more on how to measure nitrous oxide emissions, see this guide produced by New Zealand scientists and the NZAGRC for the Global Research Alliance.