The NZAGRC is partnering with industry to develop a vaccine that can reduce methane emissions from ruminant livestock such as cattle and sheep.

A successful methane vaccine would trigger an animal’s immune system to generate antibodies in saliva that suppress the growth and function of methane-producing microbes (methanogens) in the rumen.

But the research programme is not only about developing a technology that farmers may be able to use in the future. It is also about supporting the next generation of scientists for agricultural greenhouse gas research in New Zealand and developing new techniques for some of the work being done in this specialist field.

In the last few years, three post-doctoral researchers funded by the NZAGRC’s programme have completed outstanding work. Importantly, they remain in New Zealand – boosting the capability within our science ranks.

Postdocs Drs Alex Hunt-Painter (from Victoria University) and Juliana Yeung (AgResearch) were joined in the methane vaccine programme by Dr Sofia Khanum, who initially worked on a closely aligned project, funded by the New Zealand Government in support of the Global Research Alliance on Agricultural Greenhouse Gases (GRA).

That GRA project sought to increase the understanding of protein antigen selection for a methane vaccine to improve the effectiveness of antibody interactions with methanogen cells. 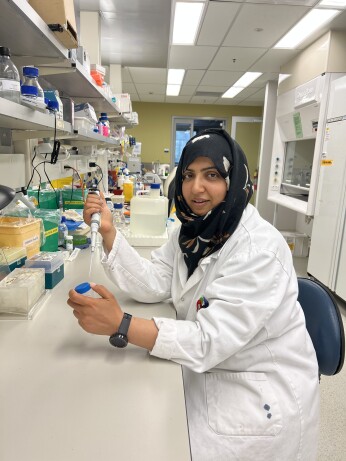 Dr Sophia Khanum at work in the vaccine lab.

Sofia played a key role in developing several technologies and methodologies from that project, which she then brought across to enhance the NZAGRC’s vaccine programme. She started out as a postdoc in the programme before being given a permanent scientist role in the research team in August 2021.

The knowledge and technologies brought across from the GRA project is an example of the methane vaccine programme benefiting from the cross-pollination of expertise and ideas.

“The GRA project produced four papers for international journals,” says Dr Neil Wedlock, lead scientist in the methane vaccine programme. “Technologies and knowledge were developed in areas such as immunomagnetic capture of methanogens, methods to measure the strength of antibody binding to antigen targets (antibody avidity) and epitope mapping of methanogen proteins. All these are now being used in our main vaccine programme.”

Juliana was also awarded a full-time position at the same time as Sofia. Alex started in January 2021 as a postdoc and is expected to continue for another 18 months or so in that role.

Dr Wedlock says the success of the postdocs reinforces the importance of providing good opportunities for early-career scientists as a means of retaining key talent.

“The programme offers a full postdoc salary, membership of any professional organisations that is required and covers all operating costs such as lab supplies. It enables young scientists to become established as researchers and helps progress their careers, be they Kiwis or from overseas.

“Juliana is from Canada; Sofia is originally from Pakistan and Alex is a New Zealander. All bring specialist skills. We advertised for Juliana’s position as a protein biochemist, whereas Sofia (immunologist/molecular biologist) and Alex (chemist) were recommended by our collaborators or colleagues.”

Following his PhD in Green Chemistry at Victoria University, Alex moved into industry where he expanded his passion for utilising innovation to reduce environmental impact. Alex became aware of the methane vaccine programme and jumped at the opportunity to work there as a postdoc.

Dr Wedlock says all three have added significantly to the research on methane vaccine development. Following Sofia’s role as a key researcher in the earlier GRA project, including lead authorship on its papers, she now has responsibilities as a Milestone Leader and key contributor in the main vaccine programme.

Juliana is also a Milestone Leader in the vaccine programme, using her skills as a protein biochemist and is the first author on two papers currently being written.

Alex is utilising his chemistry skills and knowledge in a collaborative project with research chemists at Victoria University in Wellington. In a short period of time, he has excelled in synthesising a sugar component of a cell wall structure of methanogens which is novel.

“Given that Juliana and Sofia have already become permanent scientists, and Alex is progressing very well in his postdoc work, these are great examples of how the NZAGRC’s support can not only boost science progress but also increase capability and retain talent.”

“It maintains our momentum towards developing effective agricultural greenhouse gas mitigation solutions for farmers and ensures we have the people and resources to future-proof our research efforts.”