The science of methane

Methane is a potent but relatively short-lived greenhouse gas. In New Zealand, most methane is emitted from the digestive systems of ruminant livestock such as cattle and sheep.

Where methane comes from

Methane is produced naturally, and through a number of human activities.

Natural sources include wetlands, wildfires and the digestive tracts of some plant-eating animals, such as termites.

Human activities that produce methane include the extraction and transportation of fossil fuels, the decay of organic waste in landfills, and agricultural practices such as growing rice and farming ruminant animals. Ruminants produce methane as a by-product of their digestive processes (known as ‘enteric fermentation'—see below).

Ruminant animals such as cows, sheep, deer and goats have four-chambered stomachs, the first and largest of which is known as the rumen.

The rumen acts as a fermentation vat where a complex and highly adapted community of microbes break down the feed eaten by the animal into smaller compounds. This process – known as enteric fermentation – generates energy for the microbes themselves and delivers nutrients and energy to the animal.

Some by-products of this digestive process are unable to be used by the ruminant animal and instead are used by a unique group of microbes in the rumen, known as methanogens. Methanogens are able to use substrates such as carbon dioxide, hydrogen, formate, methanol and methylamines to produce carbon dioxide and methane. The methane is then eructated (released) into the atmosphere when the animal belches.

The amount of methane produced by an individual ruminant animal is directly linked to how much it eats. New Zealand studies indicate that approximately 21-22 grams of methane is produced per kilogram of dry matter eaten. This varies only slightly across the typical feeds in New Zealand’s pastoral systems: fresh pasture (ryegrass and clover), pasture silage and maize silage.

For more information on the NZAGRC’s research programme on methane, see here. For more on what can be done on New Zealand farms at the moment to reduce methane emissions, see the Ag Matters website, which the NZAGRC manages.

Methane emissions are also produced during the storage, treatment and application of livestock urine and dung (manure management).

Farmers collect manure from milking platforms, animal housing (e.g. pig and poultry farming), holding yards, feed pads, winter housing and stand-off pads. This is either collected into a sump and directly irrigated back onto pasture within the day or is stored in larger ponds for deferred irrigation at a later time when weather and paddock conditions are most suitable.

Most of the methane emitted during manure management comes from storage ponds. This is because the solid organic matter at the bottom of such ponds is an anaerobic (oxygen-free) environment, in which methanogens thrive. Under these conditions, the organic matter is broken down by acid-producing bacteria to form simpler organic compounds such as volatile fatty acids. These are then used by the methanogens with methane emitted as a by-product. There are several factors that influence overall methane production, including temperature, but the main factor is the amount of anaerobically biodegradable organic matter available.

Technologies for capturing methane from manure management and converting it into energy exist internationally, although are not yet widely used in New Zealand. The NZAGRC is funding work in this area to better understand the technical and economic potential of new approaches in the New Zealand context.

Why methane is a problem

Tonne-for-tonne and averaged over 100 years, methane is estimated to be 28–36 times more effective at trapping heat in the atmosphere than carbon dioxide*.

However, some of the heat trapped by methane causes other changes in the global climate system, resulting in warming that extends beyond methane's relatively short lifetime in the atmosphere.

Methane makes up about 71% of New Zealand’s agricultural emissions. It accounts for about 43% of our total greenhouse gas emissions—an unusually high proportion compared to other developed nations, reflecting New Zealand’s strong primary production base and high use of renewable energy sources for electricity generation.

*Using Global Warming Potential (GWP), the method used by the UNFCCC for comparing the different warming effects of equal-sized emissions of different greenhouse gases, averaged over a 100-year period. Carbon dioxide has a baseline GWP of 1. Methane has a GWP of 28–36. 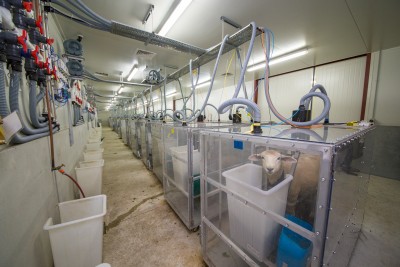 Sheep having their methane measured in respiration chambers at the New Zealand Animal Ruminant Methane Measurement Centre, part-funded by the NZAGRC and opened in 2011.

Respiration chambers are animal-friendly enclosed containers used to measure the gas output of ruminants. After acclimatisation in open-sided crates the animals enter the chambers, which are made of Perspex. Automated systems continuously sample the air entering and leaving the chambers, to measure the amount of methane formed by the animals. Temperature, humidity and air flow are continuously controlled. 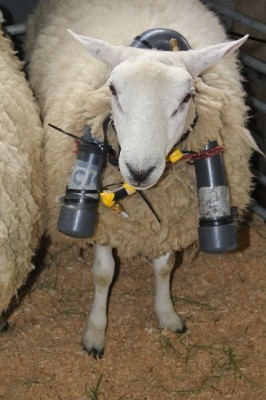 Sulphur hexafluoride (SF6) is an inert gas that is easy to detect even in minute amounts.

With this technique, a tube containing SF6 is inserted into an animal’s rumen via the mouth. The tube slowly releases SF6 at a predetermined rate and the released gas is emitted via the animal’s mouth. The animal is fitted with a lightweight yoke, which carries an air-evacuated canister that slowly draws air at a steady rate from near the animal’s nostrils. When the animal belches, it releases both SF6 and methane from its nostrils, and some of this is sucked into the canister. Air accumulated in the canister is then analysed to determine the ratio of SF6 to methane in the sample. 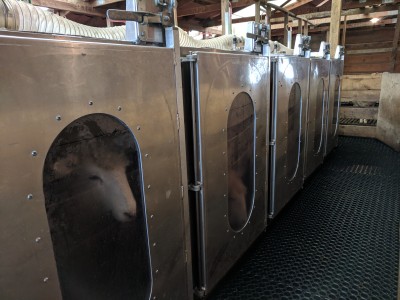 Sheep having their methane measured in the portable accumulation chambers

Typically, these are a sheep-sized transparent polycarbonate boxes suspended above a race. When a sheep walks into the race, the chamber is lowered over it and the sheep is held inside for about 30 minutes. Air samples are taken during this time and the methane concentration is analysed.

Portable accumulation chambers can be a useful method for screening a large number of animals to identify natural low methane emitting individuals. They have been used extensively in the NZAGRC’s sheep breeding work. 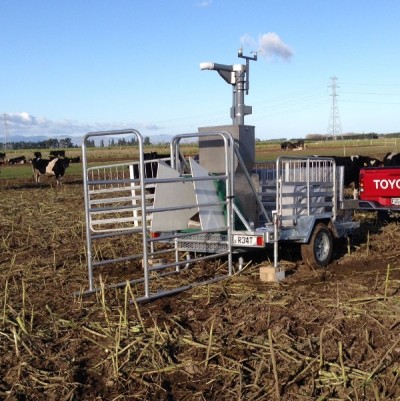 GreenFeed unit in a paddock

A GreenFeed™ unit uses similar principles to a respiration chamber. However, animals can move freely in and out of the unit and gases are measured only when the animal visits.

A small quantity of feed attracts the animal to place its head inside a semi-enclosed box, where air is drawn past the animal’s nose. Sensors measure the methane released from the animal’s nose and mouth during the several minutes it is feeding.

Daily methane emissions are estimated from multiple short-duration visits over 1-2 weeks. Similar systems in dairy sheds are being developed to measure emissions during milking or feeding trials.

The above techniques measure emissions from individual animals. However, researchers also want to know the average emissions coming from an entire herd over long periods of time. Micro-meteorological techniques achieve this by measuring wind speed, direction and turbulence, as well as the concentration of methane in the air downwind from a flock of sheep or herd of cattle. These data are used to calculate the amount of methane generated by all livestock in a paddock.

For more information on the above measurement techniques, see the manuals and guidelines available on the Global Research Alliance website. New Zealand scientists and the NZAGRC were involved in their development and publication.