The science of soil carbon

Increasing the quantity of carbon stored in agricultural soils has the potential to offset emissions of greenhouse gases to the atmosphere. However, losing soil carbon will add to those emissions.

What is soil carbon?

Carbon is constantly cycling between the atmosphere, plants and the soil. Plants capture carbon dioxide from the atmosphere through photosynthesis as they grow.

Some of this carbon is returned to the atmosphere again as carbon dioxide, through plant respiration and decay of dead plants. Some enters the soil as decaying plant matter or following excretion by grazing animals.

Under the surface, plant roots also actively exude carbon, while worms, beetles and other soil creatures cycle carbon through their activities. The animals and plant roots die, releasing more carbon into the soil. As plants, animals and microbes live and grow, they constantly release carbon dioxide through respiration.

As shown in the diagram, microbes feed on all these carbon sources. When the microbes respire, most of the carbon is released back into the atmosphere as carbon dioxide. However, some of it bonds to the surfaces of silt and clay minerals and may be held in soil aggregates (clumps of soil particles). In this state, the carbon in soil organic matter is physically protected and less accessible to microbes (it is ‘stabilised’) and can remain locked away for tens to hundreds of years.

The maximum rate at which soil carbon builds up is limited by the amount of carbon fixed by photosynthesis, so increasing soil carbon is inevitably a slow process. In contrast, the processes that cause carbon to be released back into the atmosphere—microbial and plant respiration—are relatively unconstrained, so soil carbon levels can decline very quickly when not managed correctly.

Soil carbon is also an important factor in climate change. A vast amount of carbon is locked up in soils (more than is stored in soil than in plants and the atmosphere combined), so small changes in soil carbon stocks could have significant effects on atmospheric greenhouse gas concentrations.

Many factors interact to determine the balance between carbon inputs into soil and processes that release carbon back into the atmosphere. Additionally, soil carbon stocks can vary greatly across a single paddock, depending on differences in soil properties).

What we know about New Zealand’s soil carbon stocks

Data indicate that New Zealand soil carbon stocks, in general, are relatively high compared to other countries (a little over 100 tonnes per hectare in the top 30cm). This is a result of a temperate climate, the physical and chemical properties of New Zealand soils, and agricultural production that is dominated by permanent pastures with high carbon inputs. 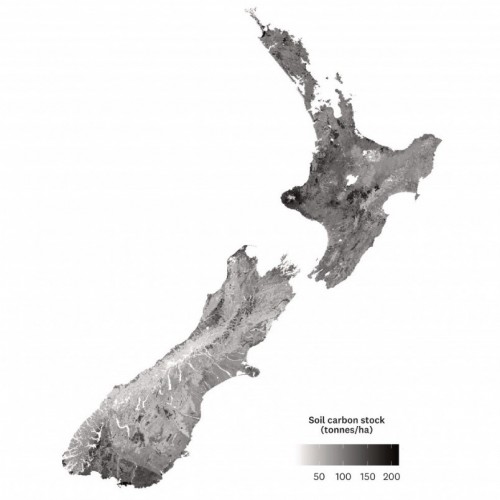 Science has shown soil carbon levels under most New Zealand pasture on flat to rolling land has changed very little over the past two to three decades. The main exception to this is organic or peat soils, which can lose a significant amount of carbon for as long as they remain drained.

There is also some weak evidence that soil carbon in some parts of New Zealand’s hill country has increased during the past 30 years. It is unclear as yet whether this is the result of pastures gradually recovering after the initial deforestation and soil perturbation decades to centuries ago, or whether changed management practices in hill countries are contributing to these increases (and the reasons might also differ from location to location). It is not yet clear whether these changes are continuing or whether these soils have now reached a new steady state.

There is a limit to the amount of carbon a specific soil can absorb, which is related to the surface area of the soil particles. At that point a soil is said to have reached carbon saturation. There is evidence that some New Zealand soils under long-term pasture are not at their theoretical carbon saturation point, but it is not clear whether this point is readily achievable.

The NZAGRC is funding a long-term national-scale benchmarking and monitoring study to look at whether New Zealand’s soil carbon stocks under agricultural land are increasing or decreasing.

To estimate the amount of soil carbon in a given area and its changes over time, scientists need to know:

Measurements are made in a number of ways.

Soil carbon stocks can vary a great deal across short horizontal distances and down through the soil layers (‘horizons’). Therefore, to assess the amount of soil carbon stored within an area of interest, enough soil samples must be obtained, to a sufficient depth, to ensure these potential variations are represented. 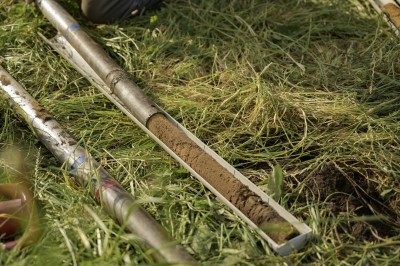 Soil samples are extracted to a depth of at least 30cm, usually with a soil corer. Researchers calculate the amount of carbon contained in each sample after measuring the percentage carbon and the mass of sampled soil (soil ‘bulk density’). Soil carbon analysis is undertaken in specialised laboratories, after soil is sieved and dried and weighed.

Soils must be sampled repeatedly over time to determine how soil carbon stocks are changing. To monitor changes, a minimum of two measurements are required: a baseline and a subsequent sampling, typically 3–5 years later. It is critical to have a robustly-designed soil sampling strategy to be able to detect the relatively small changes that likely occur in soil carbon.

Another approach is to measure all carbon inputs and outputs in a paddock or farm, to calculate whether either is gaining or losing carbon.

Measuring the daytime uptake of carbon dioxide by photosynthesis and continuous losses by respiration is challenging. These processes are very large, and a small difference generally dictates whether a farm is gaining or losing carbon.

Scientists use micrometeorological techniques to monitor this exchange. Electronic sensors measure the concentration of carbon dioxide in the air and the direction of air movement above a paddock ten times per second over a year. This vast amount of data is summed to determine whether the paddock was a source or sink of carbon dioxide for the year. This method also requires detailed records to be kept of the carbon exported in milk or imported in feed.

In contrast to soil sampling, this technique can detect changes within a few years and comparisons can be made between different management practices. However, micrometeorological equipment is expensive and, as a result, not widely used on New Zealand farms.

The measurement approaches outlined above are complex and can be expensive. Furthermore, there are many different management practices that could affect soil carbon stocks and testing them all is not feasible.

Therefore, computer models are used to test a wider range of options for a wider range of soils and climates than can be tested experimentally. Models learn from knowledge gained from field studies and used to identify promising management practices that can then be rigorously tested in the field. Models can also be used to predict long-term trends in soil processes as the climate changes.

The Ministry for the Environment reports carbon stock changes in soils as part of tracking New Zealand’s greenhouse gas emissions from land use. This is reported in New Zealand’s Greenhouse Gas Inventory, following methodology recommended by the Intergovernmental Panel on Climate Change. The default assumption in the Inventory is that soil carbon does not change where land use remains constant over time. Changes in soil carbon are only taken into account when there is a change in land use. See the Ministry for the Environment website for more.